Anyone interested in community-making and asylum justice will appreciate Fusion Swansea‘s new short film, Sanctuary. The film threads together the stories of asylum seekers and activists in Swansea.

To accompany the film, SASS co-founders Shahid Altaf, Banire Sy Savane, and Tom Cheesman have shared their memories from the early days of SASS. We discussed an important question: How are local support organisations brought to life?

SASS was born in 1999 when the UK government announced a new asylum seeker dispersal policy. In response, a group of Chilean refugees who had been here since the 1970s started an initiative to make sure that Swansea would be a welcoming place for new asylum seekers. In the first few years of SASS (then called SBASSG, Swansea Bay Asylum Seekers Support Group), volunteers mainly focused on raising public awareness about refugee rights. There were only a couple of asylum seekers living in the city.

In 2001, the Home Office began sending asylum seekers here in increasingly large numbers. Volunteers got together and asked how they could help. From the beginning, SASS was a grassroots organisation led by Swansea locals with, not just for, asylum seekers from all over the world, including Pakistan, Liberia, Sierra Leone, Iraq, and Afghanistan. The main thing people needed was a place to meet: somewhere to exchange information, support one another, drink coffee, eat biscuits. A generous Welsh couple who ran the Heyokah cafe at the bottom of Constitution Hill opened up their place as a free space for SASS to use as a base every Friday. Very soon, the cafe became a hugely popular hub.

The community blossomed, outgrowing the cafe, and in 2002 SASS relocated to the Brunswick church on St Helen’s Road. This new space was equipped with a kitchen, table tennis, and numerous rooms, and so the activities expanded. With several hundred asylum seekers now living in Swansea, SASS hosted English classes, provided a creche and play-workers (who were trained locals and refugees) for children, and people took turns to cook for each other. At the time, the only other local support was provided by a small Welsh Refugee Council office which gave legal advice. By 2005, the ‘drop-ins’ at the Brunswick – organised in the early days by Shahid and Samia – provided solidarity and support with paperwork. They were now not only on Fridays but also Saturdays, which was more convenient for families.

An essential function SASS played in those days was as the seed bed for all sorts of other activities. SASS set up conversations which led to new initiatives for asylum seekers and refugees in Swansea. For example, as a result of attending a SASS event with local councillors and MPs, the barrister Roger Warren Evens set up the charity Asylum Justice, which addressed the demand for legal advice and representation. Asylum Justice remains one of the most important immigration law practices in Wales. Likewise, City of Sanctuary started as a volunteer organisation emerging from the SASS drop-ins. A range of asylum-seeker-led organisations and communities also emerged.

Through the years, alongside the weekly drop-ins at the Brunswick, SASS has organised big public festivals during Refugee Week, countless anti-deportation campaigns, outings, trips, and barbecues, writing initiatives for storytellers and poets, book launch events hosted with Hafan Books, and even a football team, the Swansea World Stars, which played in competitive tournaments between 2003 and 2013. The World Stars were created and captained by Banire, and they won numerous awards in local leagues, with second hand boots and equipment from Swansea University. SASS had become an active and important community organisation such that in 2017 it was able to fund a full time employee and take over responsibility for Share Tawe, which was originally an independent project. Managing and sustaining the funding for an employee and all the activities has been a big new challenge SASS has risen to.

Since the COVID-19 pandemic, the weekly drop-ins have had to close. This was the heart of what SASS does. However, the community has made incredible efforts to connect despite the disconnection. Mobile phones have played an important part in sustaining the community. The Telephone Tree initiative helps asylum seekers talk to volunteers about how they are doing and what they need, who have been connecting people with food banks and other essential resources. SASS has also been organising donations to people’s doors, for example, for winter coats or shoes. Throughout the pandemic, English classes have continued online, and SASS has made efforts to address digital poverty by providing phone top ups. It can be difficult to reach everyone in need. The Home Office does not provide information about the asylum seekers in Swansea, where they are and what help they require. Despite this, SASS is a big, supportive community, connected with a broader network of organisations, institutions, and projects helping asylum seekers. Currently, there are about 80 registered volunteers, and even more supporters. SASS has played a vital part in supporting people through difficult times since 1999, but especially now.

The Centre for African Entrepreneurship

The SASS ESOL (English as a Second or Other Language) Classes Project aims to provide learners with essential language skills through covering areas such as grammar, reading, speaking, listening and punctuation to be able to properly communicate in English. The Project is reaching 40 people each week. SASS is running 8 classes at the moment, two at beginner level, two intermediate, and three at advanced level. There is also one group especially made for women.

There will be some exciting developments soon. A new advanced group will be starting, and 2 new volunteer teachers are about to join the team. Currently, there are 8 volunteer teachers, who meet every Friday to discuss what they can do more for learners, to share their teaching experiences, and to find solutions to any issues they face together.

A snapshot from the ESOL teaching team, February 2021

We spoke to some of the learners about their experiences. Lily, an advanced level learner said: ‘Their classes are really good. I mean the teacher George is really a real gentleman, approachable and supportive. I wanna say thanks for their help.’ In the same class, a Syrian learner agreed: ‘The classes are a space for learning, meeting friends and improving our English. The teachers are really helpful and cooperative, devoting much of their time to answering our questions.’ An intermediate level learner from Turkey said, ‘the teacher is well-prepared for classes and really experienced about teaching skills, arrange his speech according to our level and we can easily understand the classes.” Kristina from Russia expressed her thanks: ‘I’d like to say a big thanks to SASS and especially to George the teacher for English classes they provide. It’s a big pleasure to meet our group every week. These lessons not only improve my English but also help me to overcome the isolation. Thank you.” These are sentiments echoed by Yonatan and many others. 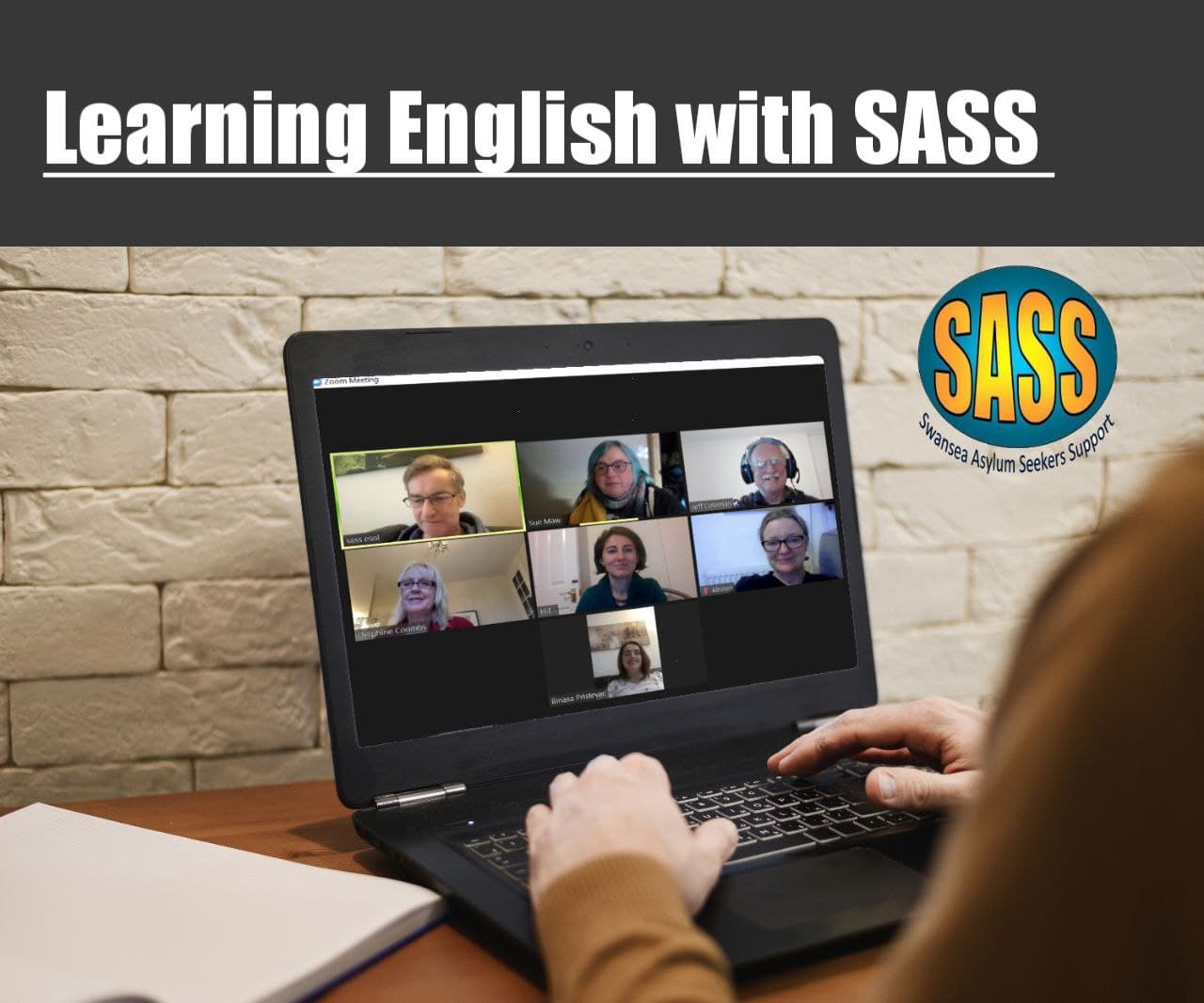 Social justice campaigners have recently been calling for the UK Home Office to end the use of army barracks to house asylum seekers. The #CloseTheBarracks campaign recognises military camps, such as Penally camp in Carmarthenshire, as unsafe and inhumane living conditions for asylum seekers and refugees. Hundreds of people have been forced to live in Penally camp, where there have been allegations of ‘cover-ups, poor access to healthcare and legal advice, and crowded conditions.’ From today, 22nd March 2021, there will be a ‘phased exit’ from Penally camp, following much campaigning, legal action, and an inspection by government authorities.

Despite this win for social justice in Wales, the quality and availability of asylum accommodation continues to be a critical issue. Sourcing adequate housing for people in need is a major ongoing challenge. In Swansea, the SHARE Tawe Project has been doing positive and inspiring work to address this challenge.

SHARE Tawe provides a warm place to stay for homeless asylum seekers who have lost their accommodation. The project connects people with local hosts in Swansea.

Mr Alan Thomas, who gave the project its unique name said: ‘”Share” refers to people being prepared to share their homes. It is a two-way thing, because the local hosts often gain a lot in terms of friendship and understanding as a result of getting to know someone from another country. “Tawe” is the Welsh name of the river that flows through Swansea and connects the community. The Welsh name for Swansea is “Abertawe” (where “Aber” means “mouth of”).’

SHARE Tawe was started as a small project by a subgroup of City of Sanctuary, with several aims. The most important aim is “To offer hospitality, in the form of accommodation, meals, welcome and solidarity to destitute asylum seekers in Swansea. The project goals cannot be done without volunteers who offer a room in their home, or who support the scheme in other ways.” SHARE Tawe has been running for over ten years, and for the last four or five it has been run by SASS, which says that its ultimate goal is “to provide sufficient support and security to enable people to focus on gaining the right to stay in the UK”.

15-20 people on average have benefitted each year, for both shorter and longer periods, and there are 6-10 people in hosted accommodation at any one time. 5-6 people have been hosted throughout the lockdown.

Despite the major challenges and unknowns surrounding Home Office policy and the closing of military camps as accommodation, volunteers are optimistic to see the continuing positive impact of the project in the Swansea community. Please click here for more information and to support the SHARE Tawe, and join our workshops on Wednesday 24th & 30th March to learn more:

If you have reported an urgent issue to Migrant Help but have not received a response, you can escalate the issue to a manager:

If you do not have the facility to use this then please email the escalations inbox below.

A wonderful event planned by local supporters to raise much-needed funds for Swansea Asylum Seekers Support. A fantastic opportunity to dance the night away to funk, soul dub and reggae from around the world. Entry is £5 on the door (free to asylum seekers)

SASS is a community of Swansea people, including refugees and asylum seekers. They are “Newcomers and Locals United”.

If you can’t make the fundraising event but would like to donate to SASS instead I have attached the details on how you can donate.

Thank you for your support!

Julie James AM for Swansea West

Support the work of SASS through single or regular donations